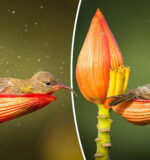 For the past six years, Rahul Singh has photographed the wildlife around his home in Jalpaiguri, India. He’s snapped candid moments with elephants, rhinos, deer, jackals and monkeys, but his true passion is for the colorful birds who nest around his city.

Last August, he captured a moment that left him stunned.

“I visited a place where there were bushes of these ornamental bananas to take photos of sunbirds sucking nectar from it,” Singh told The Dodo. “Everything was going as usual when, suddenly, I was shocked that the crimson sunbird started taking a bath in the water stored in the banana flower petal.”

Early-morning drizzle had collected in the bowl-like red petal of the banana flower, and the 4-inch-long songbird wasn’t going to let it go to waste on a hot day.

After she’d had her fill of nectar, the crimson sunbird began to use the petal as a bathtub.

In all his years of bird watching, Singh had never seen anything like it before. “I was literally stunned to see this unusual behavior,” Singh said. “I kept my camera’s shutter button pressed as the bird took her bath.”

Singh was so happy to be at the right place at the right time to capture the fairytale-like moment. Later, he shared the images on Instagram, where thousands of people were touched by them.

“This was really a once-in-a-lifetime moment,” Singh said. “It’s amazing how nature can surprise us.”