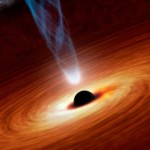 For the first time in an ordinary galaxy, astronomers have spotted a hidden pair of supermassive black holes in orbit around each another. The binary system was discovered because they were ripping apart a star just as an observatory happened to be looking in their direction. Two supermassive black holes are the smoking gun that the galaxy has merged with another. That’s because most massive galaxies (including our own) are thought to harbor at least one supermassive black hole at their center. Until now, only a few candidates have been found, and all of them have been in active galaxies where they’re ripping gas clouds apart — a destructive process that heats up gas so much that it shines at many wavelengths. They’re labeled “active” because of the resulting bright center.

The newly discovered binary supermassive black hole — by an international team led by Fukun Liu of Peking University — is not in an active galaxy, but rather, an “ordinary” one. A first of its kind.

The European Space Agency’s X-ray Multi-Mirror Mission, XMM-Newton, was surveying the sky in a random pattern when, on 10 June 2010, it observed a tidal disruption event in the galaxy SDSS J120136.02+300305.5. Days later, the galaxy was still spilling X-rays into space.

Then something weird happened: The X-rays fell below detectable levels between days 27 and 48 after the discovery. But then they reappeared and continued to follow a more expected fading rate — as if nothing had happened. “This is exactly what you would expect from a pair of supermassive black holes orbiting one another,” Liu explains in a news release.

Liu’s models of black hole binary systems predicted a sudden plunge to darkness, followed by a recovery. The gravity of one black hole can temporarily deprive the other of its fuel to fire X-ray flares.

He calculated two possible configurations: one with an elliptical orbit, the other with a circular one. In both cases, the black holes were only separated by 0.6 milliparsecs, or about 2 thousandths of a light year. (This is about the width of the Milky Way.) Being this close means they’ll eventually spiral together, and in about two million years, they’ll merge into a single black hole.

Binary supermassive black holes can tell astronomers about how galaxies evolved into their present-day shapes and sizes. “The final merger is expected to be the strongest source of gravitational waves in the Universe,” Liu says. Here, X-ray slew tracks recorded by XMM-Newton from over 1200 individuals recorded between 2001 and 2012.