Pacific Northwest paradise: This is the time of year to visit Mount Rainier for a mountain getaway 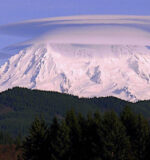 I couldn’t believe what I was visualizing after stepping off the Mount Rainier Gondola. A stranger confirmed what I experienced. “It just doesn’t look real,” the gentleman from Brooklyn said. “The only other place I’ve been to where it’s just too beautiful to believe is Hawaii.”

The sights around Mount Rainier are that remarkable. Hiking around the picturesque area was a treat for my senses. After having allergy issues, my sinuses cleared up as I inhaled fresh, crisp air that felt like drinking instead of breathing. Since there were so few people around, I could hear birds chirping, deer leaping through the brush during a hike and my footfalls.

But there was nothing like what I eyeballed. The lush green grass, which in spots had a lime color contrasted with the dark green of the trees, the endless blue sky and the snow-capped mountains. The backdrop looked like it was Hollywood CGI. Aesthetically pleasing doesn’t quite cover it.

The closest my family has been to Mount Rainier was Seattle. Last winter on one of those uncommonly clear days in the Emerald City from the Space Needle, we stared at the large, active stratovolcano, with a 14,411-foot summit elevation, and placed it on our to-do list.

Since Mount Rainier National Park is just 4 ½ hours from Spokane, my sons Eddie, 18, Milo, 15, and I decided to spend the weekend in Pacific Northwest paradise in July.

On our way up the mountain to our accommodations, we couldn’t resist stopping about a quarter way up to sample the snow on the shady side of the mountain. It was 80 degrees, but we were compelled to climb the snowbank in our bare feet and make snowballs.

Before arriving at the comfortable Alpine Inn, we noticed a bearded, middle-age man on a vista stop banging away on a full set of drums. After witnessing the percussionist, I thought we were about to experience a quirky weekend.

Idyllic Crystal Mountain’s Alpine Inn is a quaint Bavarian-style hotel, and it smells and feels exactly like a ski chalet even during the middle of the summer. We didn’t spend much time there since the great outdoors called. We met up with my friend Matt, a local, who asked what type of hike we would like to do, and I told him to hit us with the best adventure.

He did just that. We met at the Crystal Peak Trailhead. Armed with bug spray and SPF but only one water bottle each, we set off on an 8 ½-mile hike through the park. I failed to ask about the length of the hike. We started by walking along a small leg of the Pacific Crest Trail on our way to and through Sourdough Gap.

As we ascended, the sight of Mount Rainier was stunning. The sun bounced off the snow, and it glistened below in the lakes. We slowed our journey by taking photographs. When I glance at the photos of Eddie, it looks like he was placed in front of a green screen. It just looks unreal.

Matt, who never made this trek, was fairly certain how to emerge from the park. The only issue was that I slipped and turned my ankle and was out of water at the halfway point. Anyone who would like to take on Crystal Peak should be stocked with an ample amount of H2O.

However, we had plenty of bug spray even after Milo, in a scene that could have been out of “The Three Stooges,” blinded me. “Hey, Dad, there’s a pair of mosquitos by your forehead,” he said as he shot bug spray into my right eye.”

“Why you, Milo,” I exclaimed while doing my best Moe impersonation. Thanks to my ankle, lack of water and a seeping eye, plus my penchant for stopping to take photos, Matt and my boys were well ahead. After walking an hour with no one walking from behind or toward me, it started to feel like “The Blair Witch Project.”

I wasn’t panicking, but it amazed me that not a soul was on the path in either direction. Perhaps it was due to COVID-19 or being off the beaten path. I always knew I was headed in the right direction since I followed Milo’s distinctive sneaker footprint, a swirl of dots.

I was surprised that a bunch of deer leapt from one side of the path to the other 5 feet in front of me, which told me that I was in a desolate zone. At our elevation, the sun beat down like that drummer on his snare.

“Why didn’t we bring more water?” I asked as I caught up with my party. My sons were about to jump into gorgeous Crystal Lake, which felt like it was filled with ice cold water. It didn’t matter to Eddie, who stripped down to his underwear for a dip.

Milo decided to follow his brother, as I was content to set my sore feet in the chilly water. We moved on as Eddie remained bare-chested for the remainder of the jaunt. “It’s so hot,” Eddie said as he took one of myriad selfies. “I’ll be fine.” Yes, he was covered by bug bites.

We crossed over from Forest Service land into Mount Rainier National Park. I’m just glad we found our way out since the only marker on the back end of the trip is a wooden sign that says no pets or firearms.

It was a draining but awesome experience. Matt, who is constantly making his way through the woods, said it was his best hike of the year. According to Matt, with the foliage changing, this is the time of year to visit Mount Rainier.

By the time we hit the road, it was late afternoon, and we made our way back to the Alpine. We returned to the Mount Rainier Gondola at Crystal Mountain, where the view is majestic.

We stopped into the lodge-like Summit House, which, at 6,872 feet, is the highest elevation for a restaurant in Washington, for Bavarian pretzels and Bowen burgers – Waygu beef with bacon, butter lettuce, unami mayo and shaved shallots on a brioche bun with truffle fries, which were delicious.

It was about 70 degrees, but it dropped to about 46 at the summit. Even though we were chilly, the view was captivating. If you visit Crystal Mountain and don’t embark on a challenging hike like we did, you have to experience the Mount Rainier Gondola. Stick around for sunset, which was at 9 p.m. when we visited. The photos are worth the chill.

The following day, we trekked to White River for fishing. Milo had moderate success catching a few fish before tossing them back. But the most memorable experience was walking through a shallow part of the river off the road by the Alpine Inn and then waltzing over the rocks before casting throughout a very peaceful afternoon.

We did our share of hiking along the White River and were famished by the time we reached the Alpine Inn Restaurant. It was relaxing sitting on the outdoor patio. My only regret was passing on the Leschi Market fennel sausage pasta, which is made with house-made meatballs and slow cooked with Pomodoro sauce.

I was about to order it but called an audible and went with the Hungarian goulash. The spicy stew was very good and helped take the chill off my bones. Eddie enjoyed his grilled New York strip topped with garlic butter. Milo gave the thumbs up to the crab cakes, a pair of patties filled with Dungeness and snow crab.

There were a couple of trails we didn’t have the chance to hike and lakes we failed to fish, but there’s a reason to come back before ski season commences. Crystal Mountain is a scenic and serene delight with plenty of room on trails for social distance.