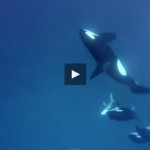 A POD of killer whales have been filmed for the first time hunting and killing a TIGER SHARK. The footage, which is believed to be a world-first, was captured off the coast of Costa Rica by underwater photographer Caroline Power and British marine biologist Nicholas Bach. It shows three killer whales working as a team to force the panicked shark to the surface, wearing it down and taking opportunistic bites at its fins. Eventually, a large bull moves in to deliver the death blow while flipping the shark onto its back in the process – which induces a state of paralysis known as tonic immobility. The pod then takes turns at eating and stripping the seven-foot shark down to its bare bones before disappearing back into the ocean. The attack took place at Chatham Bay on Cocos Island, Costa Rica, on September 8.