Oh deer! Six caribou stranded on block of ice slowly drift away from their herd after being caught out by ‘ice break-up season’ 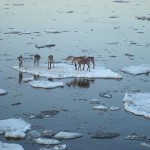 Stranded on a block of ice, these reindeer were photographed drifting away from their herd in Canada.
The six reindeer, also known as caribou, were seen floating down the Porcupine River in Old Crow, Yukon, Canada towards the border with Alaska.
The images were released by the Alaska department of homeland security and emergency management showing the ice break up season, which can cause flooding as well as catching caribou off-guard. Oh no! Caribou pack are caught adrift by an ice break-up in Canada near the Alaskan border The caribou were separated from their herd in the stunning surrounds
Dayna Lord, who took a video of the stranded animals, told CBS News: ‘We’ve seen some run off the ice and we’ve seen another bunch of caribou jump off the ice and run up the bank.
‘A lot of people feel bad, but it’s just something that happens every year.’
Caribou can weigh up to 50 stone, but luckily for these animals their large hooves enable them to paddle through water, meaning they will be able return to safety when the ice block melts.