No One’s Touched This World War I Cottage Since 1915. What’s In There? AMAZING 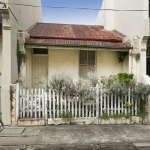 I’ve often dreamed of what it would be like to live in a different time, a time before our modern luxuries. Would I be able to build things with my own hands, cook something totally from scratch, or depend upon my own cleverness for entertainment, rather than television or the internet? I suppose that’s why I’ve always loved shows like Little House on the Prairie or Downton Abbey; they give me a glimpse into beautiful — but very challenging — days gone by.

So you can imagine my excitement when I came across this lovely old cottage and the incredible secrets it contains!

This little home, located in Paddington, Sydney, has belonged to the same family since 1915 — almost 100 years and five generations! However, the house itself was actually built during the Victorian era, dating it to around the mid- to late-1800s.

But it’s not its age that makes the property so unique: since WWI, this little cottage has remained totally untouched! Aside from two modern additions (can you find them in the photos below?), this house and its furnishings are completely authentic to the time the house was last occupied! I was stunned.

Enjoy these amazing photos — and for a great glimpse into the struggles of Victorian living, be sure to watch the video clip at the end!

Please SHARE if you love time capsule homes like this one!
——————————————————————————–
This little cottage is a perfect example of a Victorian home, which can often be found in British colonies like Sydney, Australia. The Victorian Era marked a housing boom for the “middling-classes” and the poor. This cramped home is considered a “worker’s cottage.” ———————————————————————————
In Victorian houses, the cookstove was the heart of the home. Some were used to heat boilers, which piped hot water throughout the home. However, this particular house does not appear to feature a boiler. Brrrr! —————————————————————————————-
This home was probably piped for running water, as Victorian homes typically featured indoor spigots. This room was clearly used for bathing and perhaps washing clothes. Hard to say why a stove was placed in this room, but perhaps later residents used it to heat up water for baths. Please SHARE if you loved this historically layered house!