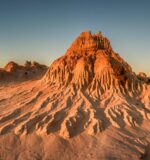 The full moon rises over the Walls of China in the Mungo national park in south-west NSW. Photograph: Dee Kramer/Destination NSW From 20,000-year-old footprints to dramatic moon rises, a visit to the NSW world heritage area is a reckoning with the passage of time

It has been more than 50 years since the ancient dry lake bed of Mungo revealed human remains which corroborated a truth Indigenous Australians already knew. When a geologist found the remains of Mungo Lady in 1968 and then Mungo Man in 1974, the findings showed that people had been living on the continent for more than 40,000 years.

If you want to walk in the footsteps of an ancient culture at the very spot where proof of their longevity was found, then Mungo national park is the place to do it.

The lake bed is still giving up its mysteries. A walk across the white sand to spot an artefact is the highlight of our trip to the Willandra Lakes region world heritage area in south-west New South Wales.

Once a month, you can take a Full Moon tour of Mungo national park to experience the thrill of watching a full moon rising over the Walls of China, a 17km stretch of sand and silt deposited over tens of thousands of years. These layers have been eroded by wind and rain to form a crescent-shaped lunette on the eastern shore of the lake.

Once in the restricted area of the lunette, our tour guide points out a midden with scattered shells and animal bones recently uncovered by the shiftings sands. The find indicates the inhabitants had cooked abundant seafood from the once-thriving lake before it dried up some 20,000 years ago.

When the lake was full it was a haven for wildlife and vegetation. Megafauna such as the diprotodon, a hippopotamus-sized relative of wombats and koalas, strolled the foreshore. As the lake dried up due to extreme climate change, much of the fauna and flora became extinct.

To stand in that vast, eerie landscape at sunset is to gain a tiny window into the ancient history of the continent.

The artefacts in this area are unique. They have been exposed not by archaeologists but by erosion, making it one of the best places on Earth to study ancient human life.

The area’s three tribal groups, Mutthi Mutthi, Paakantji and Ngyiampaa, have given permission for guided tours of some restricted areas. Our guide advises us to look, not touch, and certainly not to remove anything.

Not everyone heeds this warning. In the museum at the Mungo visitor centre, which houses a life-sized model of a diprotodon, there are letters from apologetic travellers who decided to send back the sand, leaves, shells or bones they’d collected.

Aside the visitor’s centre sits the Mungo Woolshed, an extraordinary 200-year-old building which documents the region’s pastoral history.

The highlight of the visitor’s centre is a collection of human footprints said to be 20,000 years old. They were uncovered in 2003 during a routine survey of archaeological sites and carefully transported to where they now stand, preserved as they were found. They are the oldest footprints ever found in Australia and afford scientists rich clues as to how people lived at the time.

One of the oldest human footprints ever found in Australia. Photograph: Michael Amendolia Flora and fauna you’ll meet: Red kangaroos, emus, wedge-tailed eagles, pink cockatoos and the stunning green-and-gold mallee ringneck parrot all inhabit the park. The arid landscape is speckled with saltbush, providing nourishment for the animals with its spear-shaped, succulent leaves.

Don’t miss: The star of this region is the lunette, or Walls of China. Outback Geo Adventures offer a monthly full moon tour of the area, starting at sunset. In February and March of 2020, the moon will be at its closest distance to Earth – called a super moon. The eight-hour tour includes meals, and is priced at $160 per adult.

If you can’t time your visit with a moon rise, the National Parks and Wildlife Service offers several guided tours of the Walls of China, including sunset tours, with prices starting from $50 per adult.

Where to sleep: Mungo Lodge is a comfortable ecolodge and restaurant on the edge of the park, with its own landing strip for those who want to fly straight in. It offers a range of accomodation from deluxe cabins to a budget bunkhouse, caravan and camping sites. Prices start from $45 per person per night for budget accomodation, and from $295 per night for self-contained twin cabins. Inside the main building, which was constructed from local materials in 1992, you can relax in front of the fire or enjoy a meal in the large dining room and bar. The lodge also organises scenic flights and tours.

The main camp in Mungo national park has 30 spots for caravans, trailers and tents, but you must come prepared with drinking water, cooking water and firewood because it is a remote site with scarce mobile coverage and no power. It costs $8.50 per adult on top of the park entry fees.

Nearest hot meal: The Mungo Lodge bar and bistro is open seven days a week for breakfast, lunch and dinner.

Good pub meals can also be had en route to the national park, at the Crown Hotel, some 130km away in Wentworth. The charming old pub opened in 1861, and the historic photographs on the walls tell some of the story of the town.

When to go: The best time to visit Mungo is during the cooler months as the temperature climbs well over 30C in the summer. The perfect time would be autumn or spring. Mungo Lodge closes over the Christmas period, from the 22 to 27 December.

The nearest airport, Mildura, is a 90-minute drive from the park on unsealed roads (although your sat nav or maps app will tell you it takes four hours). Mildura has direct flights from Melbourne, Sydney, Adelaide and Broken Hill, and there are car rental options at the airport.

Bring a topographic map and a compass if you’re camping or exploring on foot or bicycle. If self-driving, a four-wheel drive is recommended.

Take your best camera for unforgettable landscapes. A quick drive to Mungo lookout is a must as it offers the best views across the lake bed.

• Guardian Australia was a guest of Destination NSW.