Millions Of People Watched This Video To Make KFC Fried Chicken — At Home! 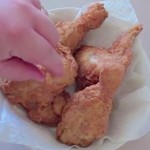 Almost seven million have people tuned in to this video to see how KFC’s famous fried chicken is made.

What I like about copycat recipes is that not only do they save you money (like this Starbucks Passion Tea Lemonade DIY), but they allow you to see just what goes into your food.

Who knows if the recipe is precisely what The Colonel used when he first came up with his genius fried chicken recipe. As long as it tastes the same, I’m not complaining.

At least now I know exactly what I am putting into my body, even if I don’t know exactly what all of the fabled “11 herbs and spices” actually are! (Also, if you’re not too scared of deviating from the norm, try this Coca-Cola chicken wing recipe!)

Youtube cook Nicko of Nicko’s Kitchen came up with this super simple copycat KFC recipe, and judging by how many views it has, I think it’s got to be pretty good!

One commenter said, “This is the first time I have made fried chicken and it’s the best fried chicken i have ever had. Thanks… also made the mashed potatoes and gravy to go with it… it taste very similar to KFC but better and cheaper!” [sic]

All you’ll need are the following ingredients:

SHARE if you love fried chicken and can’t wait to try this!