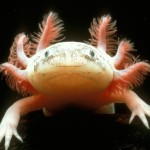 The ghostly looking Mexican axolotl retains some of its larval features for life, including its feathery pink external gills.

The Mexican axolotl (pronounced ACK-suh-LAH-tuhl) salamander has the rare trait of retaining its larval features throughout its adult life. This condition, called neoteny, means it keeps its tadpole-like dorsal fin, which runs almost the length of its body, and its feathery external gills, which protrude from the back of its wide head. Found exclusively in the lake complex of Xochimilco (pronounced SO-chee-MILL-koh) near Mexico City, axolotls differ from most other salamanders in that they live permanently in water. In extremely rare cases, an axolotl will progress to maturity and emerge from the water, but by and large, they are content to stay on the bottom of Xochimilco’s lakes and canals.

Close relatives of the tiger salamander, axolotls can be quite large, reaching up to a foot (30 centimeters) in length, although the average size is closer to half that. They are typically black or mottled brown, but albino and white varieties are somewhat common, particularly among captive specimens.

Axolotls are long-lived, surviving up to 15 years on a diet of mollusks, worms, insect larvae, crustaceans, and some fish. Accustomed to being a top predator in its habitat, this species has begun to suffer from the introduction of large fish into its lake habitat. Natural threats include predatory birds such as herons.

Populations are in decline as the demands of nearby Mexico City have led to the draining and contamination of much of the waters of the Xochimilco Lake complex. They are also popular in the aquarium trade, and roasted axolotl is considered a delicacy in Mexico, further shrinking their numbers. They are considered a critically endangered species.

Type:
Amphibian
Diet:
Carnivore
Average life span in the wild:
10 to 15 years
Size:
Up to 12 in (30 cm)
Weight:
2.11 to 8 oz (60 to 227 g)
Protection status:
Endangered
Did you know?
Because they have the ability to regenerate lost body parts, axolotls are probably one of the most scientifically studied salamanders in the world.