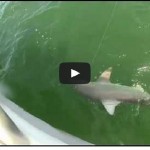 I wasn’t familiar with the Grouper fish before I saw this video, so it’s good to know there’s yet another sea creature out there that could swallow a human whole.

YouTube user Gimbb14 was fishing off the coast Bonita Springs, Florida, when he managed to snag a five foot long black tip shark.

Sadly, the ocean is a cruel mistress, and she didn’t think this particular fisherman was worthy of such an impressive catch.

Instead, an enormous grouper fish emerges from the depths to gobble the shark up in a single bite.

The grouper fish can grow up to eight feet long and tip the scales at 308 kgs, so it’s little surprise this shark could still be considered a light lunch.

If you did happen to think it was safe to go back in the water, you may want to reconsider