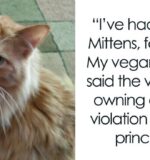 Correct me if I’m wrong, but when people fall in love with someone really hard, they’re ready to sacrifice anything. Well, almost. We can stop biting nails, eat less junk, and swap that beloved gross hoodie we never part with for a nice shirt, but when it comes to pets, it’s a whole different story.

A 22-old-man has been dating his girlfriend for 7 months and according to him, “she’s amazing and we’re super compatible in a lot of ways.” She’s also a vegan, a fact which shouldn’t make a whole lot of difference, but the way she approaches veganism kind of does.

One day, the girlfriend sat him down and said that there was no future until the author gives his beloved furry friend away. Her reason was—it violates the principles of veganism. Read the full story right below and share what you think of the whole situation in the comment section!

In what felt like a slap in the face, this guy was demanded by his vegan girlfriend to give away his cat because she said it violates vegan principles Here is the full story he shared on Reddit In an update post the author later released on r/relationship_advice, he made it clear that his girlfriend’s extreme views on domestic cats are not representative of the vegan/vegetarian community as a whole. “I do think that, sometimes, new vegans can be a little overzealous. In reality, most of us are just doing the best that we can to not hurt animals!”

For those who’re wondering, the author has also said that they broke up, “obviously.” “I would never, ever give up my cat Mittens,” he said and added that “Many users said that this situation was about control, not veganism, and looking back, I do see a pattern of control on my girlfriend’s part.”

The author concluded that he was “blind to it” and given the issues they had, he decided it was best for them to part ways. The author also shared a picture of his furball Mittens which you can find under an Imgur link right here.