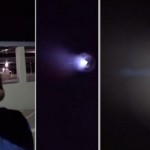 Last night in the skies over California, and reportedly all the way to some parts of Arizona, residents looked up in awe at the sight just above their heads

A mass sighting of something strange was seen by millions of people on the south western coast of the United States. And while there are millions of cell phone pictures and videos out there right now, one man and his friends were lucky enough to already be outside in a Los Angeles parking lot, doing some time-lapse photography with a high powered camera.

Julien Solomita and his friends quickly stopped their star gazing and immediately turned their camera on something a little closer to home, though definitely out of this world.