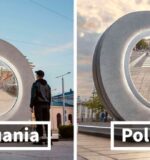 ociety is evolving and we’ve come a long way from slavery and women not being able to vote. But we have still room to improve: to stop discriminating against people that are different, to accept people that think, dress, talk different than we do.

The divide between people is a problem as old as the world, but it needs modern solutions. The internet is now all over a ‘portal’ that was opened in two European cities, Vilnius and Lublin, which was built for the very reason to make the distance between us and them shorter. Not only is the meaning behind this project amazing, but it also just looks so cool and futuristic. The portal is of a circular shape that symbolizes the wheel of time, and in science fiction, it represents space and time, which ties back to the circle being a portal. This virtual bridge between Lithuania’s capital, Vilnius, and one of the oldest Polish cities, Lublin, is the first of its kind. In Vilnius, the portal can be found next to the Vilnius train station. Meanwhile, in Lublin, it resides on Plac Litewski.

These 2 cities have a historical connection as the Union of Lublin was signed on 1 July 1569 between Poland and Lithuania in that very city. That union created a single state, the Polish–Lithuanian Commonwealth, one of the largest countries in Europe at the time. Bored Panda got in touch with the PORTAL team and asked if this was planned. Apparently, it was an unexpected coincidence. They were reaching out to different cities abroad that would partner up for this project and the circumstances lead to that city being Lublin. It is really symbolic that these two cities are the ones to spread the message behind the project, which is to be united and not divided. The ‘portals’ both have screens and cameras to broadcast the other city live. The view that you see on the screen is made to resemble what astronauts see when looking out onto the world below.

It is called the ‘overview effect’ and astronauts experience it when they see Earth in space, so little, so fragile in this big world.

Hazzaa Ali Almansoori, the first person from the United Arab Emirates in space, said “It’s amazing how space unites everyone. Despite from which country you are coming from, despite your religion or your background, it unites everyone… Our objective is one: it’s for humankind.” The portal now is silent as it would be technically difficult to have sound 24/7, however, it is possible and for special events it will be done.

Despite this, the creators of the project believe that people will find a way to communicate. They noticed that people wave, send a kisses or do pushups, so they still get involved.

The team told us that “it seems with physical measures like the PORTAL the inner psychological barriers disappear and people get involved in the action in front of the portal with enthusiasm and are friendly to one another. Most of them don’t need encouragement and approach the portal with curiosity or maybe they just crave human connection during this pandemic.” They think that striking a conversation with complete strangers just in the street would present difficulties and it looks like the portal makes people more relaxed. The project’s main purpose is to connect people. On the official website, they say “Surrounding ourselves with only those who are near and speak the same language gives us comfort and a sense of stability. It also limits the world perspective to the narrow inner circle of ours. Slowly it becomes a perfect space to awaken insecurities towards those outside it and a perfect excuse to be careless about the world that belongs to them. Every day there is less room left for dialogue, empathy, and compassion, for feeling and being united in our home—a tiny spaceship Earth rapidly decaying due to too many of them, and too little of us. It is so easy to believe we are each a wave and forget we are also the ocean. Let‘s transcend this sense of separation and be the pioneers of unity.”

It almost seems like we’re welcoming aliens to Earth, but sometimes we do treat people like they are not from this planet and don’t deserve being here. The person behind the idea, Benediktas Gylys, says that many of the potentially deadly challenges humanity is facing, such as polarization and climate change, were caused by a lack of understanding of others and the world at large. So the PORTAL should unite people and is an invitation to rise above the illusion of division that we created ourselves. Although it’s not a portal that we see in movies or read about in books, it’s still the nearest thing to teleportation and it’s so cool that you can communicate just with random people on the street that are hundreds of kilometers away.

It caught the attention of redditors as the post about it got 140k upvotes in less than a day. People were joking about Stargate and that if you run through it, you end up in Poland. It seems that people liked this idea, but others were sharing that something similar was done where they live, but it didn’t last long as people started to abuse the portal. The project had its challenges, “Firstly, it was a challenge to draft a design for the PORTAL that is minimal and simple yet able to fit all the complex electronics inside and prevent vandalism and negative environmental impact.” Then the design had to materialize and after a lot of testing, it was chosen to use “concrete, stainless steel and tempered glass to build these 11 tons 3 meter wide twin Portals.”

It all came to fruition because the people at Vilnius Gediminas Technical University Creativity & Innovation Centre “LinkMenų fabrikas” were crazy enough to believe in the idea and were able to realize it. The project was finished during a pandemic, when travelling inside the countries’ borders can have restrictions, so travelling to other countries is almost out of the question. The creators at Vilnius Tech were working on the portal for 5 years and now was the best time to introduce it publicly, when everyone is so isolated and craves a little taste of something new. The portal between Vilnius and Lublin was the first in the world, but it will not be the last. The creators of the project hope that they will connect tens of cities all over the world and two new ones are already scheduled to open soon: one in Reykjavik, Iceland and another in London, United Kingdom.

The team revealed that Reykjavik was chosen because of the very important historical narrative that connects it to Lithuania: Iceland was the first to recognize Lithuania’s independence in 1991 and Lithuanians are grateful for it and want to continue the partnership between the countries. Also, because Reykjavik perfectly contrasts with Vilnius.

London is important for them because they are starting a friendship with another international initiative. Now Vilnius is connected to Lublin and it will last until August. Then it will change to another city. The project creators think that it is possible that in the future the portals will change cities every 10 minutes or so because they are open to everyone who would like to join.

Although the cities will have a limited connection time, the project has no time limit, “the project will last until the destruction of the planet or the end of the problems that cause the divide between people.”

What do you think about this idea? Would you like to see such a ‘portal’ in your city? Let us know your thoughts about this project in the comments.