Lion vs Hyenas: Pack of Hyenas Attack Lion And Steal Its Prey 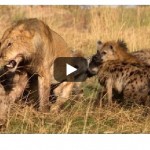 This amazing footage shows an audacious clan of hyenas boldly overpowering a young male lion and making off with his freshly killed wart hog. The 20-strong scavenger pack attacked the lone lion, leaving it “battered, bruised and hungry”. Photographer Mark Sheridan-Johnson said he’d never before seen such a large clan dominate a lion in its pride.