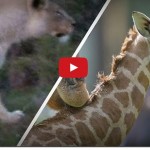 A LONE lioness shows her awesome power by bringing down a young giraffe single-handedly. The rare sight was captured on video by game ranger Jone Fick at the Shamwari Game Reserve in South Africa. With terrifying speed and deadly precision the lioness brought down the year-old calf in front of its distraught mother in broad daylight. The event was unusual as lionesses normally hunt in packs at night.