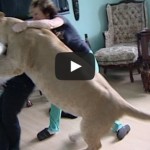 THIS shocking footage shows the terrifying moment a lioness sinks its claws into a man’s back. The attack took place during filming for a TV documentary in the Czech Republic in November 2013, but the footage has only just been released. The lioness had been domesticated since birth, but disaster nearly struck when she attacked one of the production team in the living room. Luckily, the owners were on hand to wrestle the lion off the man, leaving the victim with only scratches and cuts on the front and back of his body.