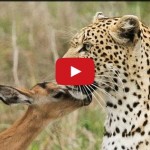 Most impalas run for their lives at the sight of a leopard – but this plucky youngster seems determined to BEFRIEND one. The bizarre interaction filmed in the Kruger National Park, South Africa, sees the baby animal nuzzling the killer cat’s nose and mouth as it lazes in a clearing. And even when the leopard starts playing a little rough, the newborn makes no attempt to leave – and even follows it around. The encounter was filmed by game ranger Estiaan Houy, 31, while out on safari with British and American guests.