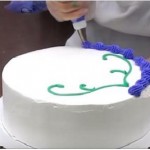 It was Zach’s mother-in-law’s 60th birthday, so he decided to pick up a cake at the local Sam’s Club. Just before the cake was finished with its floral decorations and “Happy Birthday Donna,” Zach pulled out his camera as the lady behind the counter began spinning the cake and gently piping it with bright purple, yellow and green icing. This video was uploaded in 2011, and in five years it’s racked up over six million views! People are oddly fascinated by the woman’s ease and skillful technique. It’s always interesting to take a peek “behind the curtain” and see how the magic is made.

Some viewers are critical — saying there’s a small dent in the icing, and that the roses aren’t perfectly piped. But in the end, all that really matters is that her customers are happy with the cake. Judging from their “oohs” and “ahhs” when they see the finished product, you can tell they’re totally satisfied with their birthday confection.

It may not be a perfect cake, but it’s beautiful nonetheless. I have a brand new appreciation for the bakers at Sam’s Club!