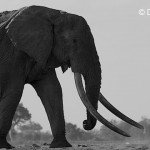 Satao lived in Tsavo East National Park in southeast Kenya and was celebrated as one of the last surviving great tuskers, bearers of genes that produce bull elephants with huge tusks reaching down to the ground. This news follows hard on the heels of the slaughter of another legendary tusker, Mountain Bull, deep inside the forests of Mt. Kenya.

Of all the elephants that have died in Kenya, these deaths are the hardest to bear. The grief in Kenya at the slaughter of our iconic elephants is translating into floods of tears, emotional poems, and outrage on Twitter and Facebook.

I had suspected for days that Satao was dead. The rumours were too many and they came from too many different people for them not to be true. Bad news travels fast in Kenya. Moreover, like everyone who had ever heard of Satao, I was already concerned for his safety.

I first learned about Satao through an emotional and beautifully written blog post by Mark Deeble, who described him as being so intelligent that he knew he needed to protect his enormous tusks by intentionally hiding in bushes so they couldn’t be seen. At the end of the post Mark wrote:

I am appalled at what that means – that the survival skills that the bull has painstakingly learnt over half a century have been rendered useless by the poachers’ use of mass-produced Chinese goods; GPS smart-phones, cheap motorcycles and night vision goggles. I think the old bull knows that poachers want his tusks, and I hate that he knows. More than anything, I hate the thought that poachers are now closing in on one of the world’s most iconic elephants.

Then in early March, during the great elephant census, we heard that the poachers had got to him. Mike Chase from Elephants without Borders reported seeing two seeping wounds on Satao’s flank. Veterinarians rushed to the scene and confirmed that these were arrow wounds.

It’s hard to imagine what was going through the minds of the poachers on the day that they approached this mountain of an elephant and shot at him with crude bows and poisoned arrows. It must have been terrifying and yet the sight of his massive gleaming tusks probably left them salivating with greed.

For days Satao must have endured excruciating pain from the festering wounds. But he recovered and we all heaved a sigh of relief when it was reported that his wounds were healing on their own. The Facebook post by Save the Elephants about his recovery attracted more 200 “get well soon” comments.

Then in the first week of June Richard Moller, Executive Director of The Tsavo Trust, found a massive elephant carcass in a swamp. “I knew instinctively in my gut that this was Satao, but there was a tiny chance that I was wrong. I had to verify it before we go public,” Richard told me.

The Tsavo Trust runs an inspirational campaign to bring attention to Kenya’s last great tuskers . Their work brings huge joy and celebration every time an elephant with tusks sweeping to the ground is found.

When I heard that Satao may have been killed, I posted a message on Facebook. I said I hoped that the rumours were wrong and that Satao was safe. I had to hastily remove the post after Richard explained: “We don’t want to alarm people if there’s even a 1% chance that Satao is still alive”.

For days Richard and (Kenyan Wildlife Service) KWS rangers visited the carcass. It was certainly a giant tusker, but it was hard to tell if this was Satao, as the face was mutilated face and the tusks gone. They flew over the park and searched for Satao, hoping against all odds that he was still alive.

Then finally, on 12 June 2014, Richard admitted to me that his first gut feeling had been right: “Today I had to write my official report to KWS and confirm to them that Satao is dead. It was the hardest report that I have ever written, I couldn’t see past a wall of tears.”

In voice choked with grief he begged me not to post anything until KWS had officially broken the news. It is not only the rangers in Tsavo or those who knew Satao who are sorrowful, all of Kenya is in a state of deep grief. Satao was not just a Kenyan icon, he was a global treasure. He was of such a phenomenal size that we knew poachers would want him, and no effort was spared to protect him. He had 24/7 protection from KWS and conservation organizations. Even as we mourn Satao’s passing, Kenyan’s are asking: what went wrong?

It may take days for the KWS to provide more details about this terrible news. The country’s authorities are loath to admit the scale of the current crisis.

According to the latest figures published by KWS, 97 elephants have been poached in Kenya so far this year . Nobody in Kenya believes this figure, which suggests that less than one percent of the national elephant population have fallen to poachers’ guns.

The official figures do not tally with the many reports of elephant killings in and around the Masai Mara, Samburu, Loita Hills, Marsabit, Tsavo, Mount Kenya, Aberdares, Shimba Hills and the north eastern coastal forests.

I estimate, from the reports I have seen, that the elephant poaching in Kenya is at least 10 times the official figures, but it is impossible to verify this as the KWS jealously guards the elephant mortality database.

A few brave people within the system describe a systematic cover up of the real figures. To many of us Kenyans, this problem is even more serious than the poaching. Our wildlife services are like the drug addicts who are the most difficult to help, those in denial that there is a problem to be fixed.

Those at the helm who craft the KWS’s communications seem blissfully unaware of the damage caused to Kenya’s reputation by the lack of transparency and accountability around poaching figures.

Kenyans are angry and confused. Elephants do not belong to KWS but to the people of Kenya. Elephants are an important national asset that make a significant contribution to Kenya’s GDP through tourism. It is therefore in the national interest that the correct figures are shared with the public.

It is also confusing for donors. KWS is fighting furiously for funds to strengthen anti-poaching efforts, and massive ivory seizures also continue to snatch headlines, but according to official figures and statements, there is no elephant poaching crisis.

The appalling news of Satao’s death comes at a time when Kenya is preparing to showcase our conservation successes at the UNEP Governing Assembly which starts on 24 June. Instead Kenyan delegates will bear the heavy burden of conveying the news of the passing of this gentle, intelligent and compassionate giant.

I call on Achim Steiner, UNEP Executive Director, to set the tone for the Governing Assembly by starting with a minute’s silence: so that delegates can reflect on their duty of care towards our fellow beings, and in memory of Satao, Mountain Bull, and all the others who have died before them.