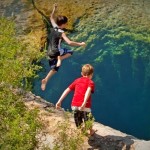 The largest underwater cave in Texas has been known to swallow people whole, it has also provided a nearly non-stop source of water for thousands of years. Jacob’s Well is an amazing sight to see, as the water from deep within the well pools out into a natural spring that runs off into Cypress Creek.

Many people visit Texas Hill Country just to see Jacob’s Well, despite the fact it has claimed a number of lives.

Known as one of the most dangerous dive spots on the planet, Jacob’s Well is truly incredible to witness.

Even if you’re no cave diver, you can still enjoy Jacob’s Well. People of all ages come with no intentions of going down into the caves below. It’s plenty of fun just to jump off of the surrounding rocks and into the clear water spewing from the well. As you jump in, it looks like you’re going to fall down an endless hole, as the 13-foot opening of Jacob’s well lurks beneath the water’s surface. If you do descend down the well, there are numerous chambers at various depths. The first chamber is located 30 feet from the top of the well, and it also continues another 55 feet down. Here it is bright, and wildlife and algae are present. Things change when you reach the second chamber, located 80 feet below the surface.

Down here divers must be aware of a certain chimney that appears to be a way out of the chamber, this ‘fake’ exit has trapped and killed at least one diver. The third chamber can be reached through an opening located in the second chamber. Few have had the guts to venture inside of the fourth chamber, which includes squeezing through a very narrow passageway.
The ones that have report gorgeous sights, including unmatched limestone formations packed throughout.
Instead of gravel, the floor of this chamber is covered with fine silt. One false step can lead to silt spewing everywhere. According to professional cave divers who have had this happen to them, everything goes black and you can’t tell up from down.
There was a time when you could not enter Jacob’s Well because it produced 170 gallons of gushing water per second, making it impossible to go inside. Dorothy Wimberley Kerbow remembers some 70 years ago, when her father playfully tossed her into Jacob’s Well. She only dipped about 2 feet beneath the surface before popping back up under the force of the water.

Now that entering the well is possible, many inexperienced divers venture down to the chambers. Unfortunately, at least 8 have died during their explorations.

Jacob’s Well was first discovered back in 1850 by early settlers who were overjoyed at the sight of the well and all of its perfect looking blue water. Today the well is still enjoyed by many and remains full of history.
The amount of water released by Jacob’s Well has reduced year after year, allowing divers to reach new depths and discoveries, while also presenting a problem. In 2000, and again in 2008, water from Jacob’s Well stopped flowing completely, alerting locals and conservationists that something needed to be done. No one wants the famous well to turn into “Jacob’s Cave.” In hopes of preserving Jacob’s Well for future generations, one generous man created The Watershed Association. The job of this association is to spread awareness and protect Jacob’s Well from developers and other unnatural harms. This same individual is donating his house as a research and education center where people can learn more about Jacob’s Well.