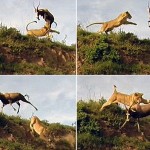 A soaring lion leaps from a ridge to catch a fleeing antelope in mid air.
The extraordinary take-down happened after a pair of lionesses surprised two blesboks running in their direction.
To escape, a frightened blesbok jumped several metres from the ridge – only to be intercepted mid-flight by the hungry female. The other blesbok was left to make a lucky getaway, while the captured animal was swiftly devoured by the fearsome predators.
Tour guide Joné Fick, 28, filmed the incredible moment just feet away from her tour bus.

The group had been watching the two lionesses perched on the ridge in the Shamwari Game Reserve in South Africa.
Joné said: ‘Suddenly the lionesses got up and ran full speed at the two blesbok, which were running up the hill towards them.

The blesbok decided to take the only option out which was jumping towards the road, falling four metres to the ground.
‘The second lioness made an amazing jump towards this blesbok and grabbed it mid-air only to slam with it on to the road right next to our vehicle.
‘I’ve never heard of such a sighting – this was pure luck to be in the right place at the right time.’

Despite hitting the ground hard, the animals continued to fight before the two lionesses overcame the South African antelope.
Joné added: ‘In my six years of living and working in the bush, this is definitely my best sighting ever.
‘The lioness and blesbok fell so close on the ground next to us that I sure they would fall against the vehicle.
‘We were all mumbling words of disbelief and some people were just staring at the scene not able to say anything at all.’
After overpowering the blesbok, the lions dragged it back to the top of the ridge to enjoy a hard-won meal.