Is that it? Fascinating image reveals what the world’s 7.2 billion population would look like if it was piled up in the Grand Canyon 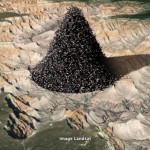 f you took all the world’s population and dumped them into the Grand Canyon they wouldn’t fill a fraction of it.
In fact the 7.2 billion people would only form a comparatively tiny pile – as shown in this fascinating mock-up image.
The graphic was put together by respected YouTube presenter Michael Stevens on his Vsauce channel, which juxtaposes the population of the world alongside the famous deep canyon by the Colorado River – situated in Arizona.
Scroll down for video If you took all the world’s population and dumped them into the Grand Canyon they wouldn’t fill a fraction of it. In fact the 7.2 billion people would only form a comparatively tiny pile – as shown in this fascinating mock-up image
Apparently, even all of humanity throughout history, across all the ages – estimated to be 106 billion – would only be enough to make 15 piles across the Grand Canyon and not sufficient to cover its entirety.
The vast crevasse is 277miles (446km) long and a mile (1.6km) deep in places.

The graphic is based upon the work of data visualisation blogger Eesmyal Santos-Brault who said that as the average weight of a human is 154lbs (70kg), seven billion people would weigh around 490million tonnes. The graphic was put together by YouTube channel Vsauce, which juxtaposed the population alongside the famous deep steep sided canyon by the Colorado River – situated in Arizona in the United States
He wrote in a post: ‘Since we are comprised of mostly water, which has a density of 1000 kg/cubic metre, the average volume of a human is 0.07cubic metres.
‘That means the total volume of all humans would be 490 million cubic metres, a cube with sides 788metres long.’
If this cube was placed next to the world’s tallest building – the Burj Khalifa in Dubai, which is 2,716ft (828metres) tall, it would be 131 ft (40metres) taller.
The Grand Canyon National Park receives around five million visitors a year, 90 per cent of whom travel to the South Rim, which has an average elevation of 7,000ft (2,134metres). Nature in all its glory: Tourists take it all in at the Grand Canyon Skywalk. The park receives close to five million visitors a year