Iceberg Alley: Where You Can Watch Enormous Icebergs Drift in Front of Your Window 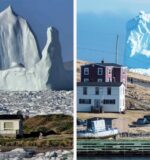 Stretching from Arctic to the southeast coast of the island of Newfoundland, Iceberg Alley is the perfect spot for iceberg viewing – even from your kitchen window, while cooking the local staple ‘Jiggs dinner’.

If you live in Canada’s Iceberg Alley, you will never be short of icebergs to view. And in the spring, when the sea ice around them melts, they’ll look even more spectacular.

The icebergs come from even further up north, mostly from Greenland, where chunks of glaciers tend to break off during the spring and summer. Ocean currents then take them from north to south, along Baffin Bay towards the Labrador Sea, where they finally melt.

A smaller percentage of these behemoths come from the Canadian shoreline, with currents transporting them from Baffin Bay through the David Strait into the Labrador Sea, to finally arrive at the eastern and western shores of Newfoundland.

These gigantic chunks of ice are approximately 10,000 years old, and an estimated 400-800 of them flow through Iceberg Alley every year. Their speed depends on many factors such as their shape and size, as well as winds, currents, and waves, but on average it’s around 0.4 miles per hour.

These icebergs look huge, but what you see is only the “tip of the iceberg”. Only about 10 percent of the iceberg is above water!

According to Atlas Obscura, there are six types of icebergs and Iceberg Alley has all six of them. Tabular icebergs are flat slabs of ice that are much greater in width than height. Blocky icebergs have steep sides and clear-cut angles, and resemble truncated pyramids. Wedged icebergs have a steep side and a sloping side. Dome icebergs sport a rounded top. Pinnacle icebergs have one or more steep pinnacles that protrude upward. Finally, dry dock icebergs are U-shaped.

As icebergs drift south, they end up in warmer and warmer waters and start to melt more and more. At this stage, they become dangerously unpredictable – just think of the one that sank the Titanic off the coast of Newfoundland back in 1912. Although nowadays we are able to monitor medium and large icebergs through satellites, small ones usually go unnoticed, posing the greatest danger for smaller boats.

The one below, however, was definitely detected by any satellite. This towering iceberg captured international attention in 2017 when it parked beside a tiny Newfoundland town, completely dwarfing it.

The iconic view was even turned into a stamp:

So despite the fact that this giant melted a long time ago, it keeps circling the globe – on postcards. Iceberg Alley is indeed amazing.