I Thought This Was A Dirty, Old Bus, Then I Peeked Into The Window… WHAT? 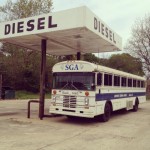 I love my home, but I would love it even more if I were able to plop it down wherever I wanted, like smack dab in the middle of the Redwood forest or perched on a cliff on the New England coast. Seems like a dream, right? Now imagine if you were able to move your house to both of these locations within a span of three months.

That’s not a dream — it’s a reality for one very ambitious couple.

One of the most appealing aspects of the Tiny House Movement is mobility. Many people are putting wheels on their travel-sized abodes and trekking across the country in their homes-on-the-go. It takes the concept of having the comforts of home while you travel to a whole new (and literal) level.

Much like Jenna Spesard and Guillaume Dutilh – a couple that decided to ditch their day jobs in favor of building their own mobile tiny house and roaming our great nation— Lindsey and Steven, a couple living in Florida, longed for the same kind of lifestyle. So they scraped together $2,000, went down to Georgia, and bought themselves a 1984 Blue Bird Bus that looks a bit shabby on the outside. But once I saw the inside, I couldn’t believe me eyes…
—————————————————————————————————————–
The couple, who were living in Florida but are originally from Oregon, decided they wanted to move back home. Please SHARE this with everyone you know if you support the Tiny House Movement!