Huge Crocodile Munches On A Shark 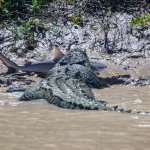 ﻿It’s a famous debate – who would win in a battle between a shark and a crocodile. We now have another data point to add to this, with Brutus, a well known inhabitant of Australia’s Northern Territory, photographed eating a shark.

Brutus the one armed croc is so famous he even has a Snopes thread verifying his authenticity. Tour operators on the Adelaide River (safely distant from the city of the same name) like to show Brutus off to visitors and have trained him to jump out of the water to take lumps of meat dangled off the boat.

However, on a recent visit they got something special, with the sight of Brutus attempting to consume a bull shark. At 80, Brutus’s teeth are not what they once were (crocodilian capacity to regrow teeth is not perfect), so he struggled to finish the shark off. Nevertheless, at 1.5m to Brutus’s 5.5 the shark was no match for its reptilian foe.

“We watched it for probably a good five or 10 minutes. The crocodile slid back into the water with the shark, and then the crocodile started to take it back into the mangroves to have it for himself,” photographer Andrew Paice told The Sydney Morning Herald. Sadly we don’t have video, like the footage of a snake eating a crocodile, but Paice did get some great photos.

Happily for those who love a never ending argument, a single incident does not settle the question. Brutus was just getting his revenge – his missing right arm is suspected to have been lost many years ago to a shark.

A couple of years ago a crocodile was spotted eating a shark in the same river. On the other hand, this video shows the head of what was once a 3.5m crocodile, which appears to have been bitten in half by a shark.

When Fairfax media consulted Taronga Zoo a spokesperson said sharks would generally be able to escape crocodiles in deep water, but could be trapped close to shore

There are many different species of sharks, and a smaller number of crocodiles. It’s hardly fair to put a puny representative of one up against the most dangerous the other can offer. We are still waiting for the outcome of a struggle between a fully-sized saltwater crocodile and a great white shark.