How It Feels To Be Chased By A Great White Shark 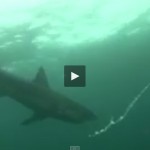 WITHOUT warning, a gaping mouth full of dagger-like teeth opens up before you. The jaws bite down in a flash and the last thing you see are gums, gills and a watery stomach cavity. This is what it feels like to be ambushed and eaten by the world’s largest predatory fish. The amazing close-quarters footage of a great white shark attack was captured using a remote camera towed behind a small boat. This 4m shark had been lurking nearby when it attacked the would-be seal without warning. Luckily the boat did not capsize and the only damage was to the tow cam’s glass fibre case. This is just one example of the diverse underwater life captured by Charles Maxwell, a 68-year-old cameraman and diver who lives in Cape Town, South Africa.