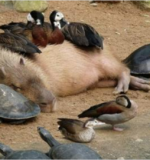 These peaceful little guys (who are the largest rodents in the world) are called capybaras, and they get along extremely well with literally every other animal species. Including humans.

How come? Well, it certainly doesn’t have to do with the fact that they eat their own waste. No, what it probably has to do with is their incredible inner peace.

Just look at this.

And indeed, the photo/video evidence of the capybara’s friendliness towards other animals is more than convincing.

Apparently, all domestic and wild animals (including crocodiles!) seem to be happily hanging out with this friendly creature that looks like a rat-pig hybrid.

But really, what’s their secret then?

Native to South America, these cute animals are extremely social, often forming groups of 10-20 individuals that live together.

Third, capybaras are semi-aquatic mammals that prefer to live near bodies of water. They are master swimmers that can avoid predators by staying submerged for up to 5 minutes. They even only mate in water.

But as for why everybody loves them, there are only guesses. Yet, there’s certainly much evidence around. Now, see for yourself.

Fianlly, here’s a video trying to comprehend it all.

By the way, did you know that capybaras are very good at crossing busy roads together, too?