His Daughter Was Hit By A Drunk Driver. What He Does In The Hospital Will Shock You. 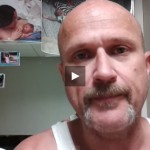 Every day, nearly 30 people in the United States die in motor vehicle crashes that involve drunk driving. This amounts to one death every 51 minutes.

John Seaman knows firsthand the seriousness of this epidemic. In May of 2012, his 20-year-old daughter Kellie was hit by a drunk driver. In the video he posted to YouTube, John introduces us to Kellie as she lay in a hospital bed, unable to move or speak. It’s a shocking sight to see. And while the driver could only receive a maximum 10 years in jail for his decision, John notes Kellie was given a life sentence.

In October of 2012, John’s update on his daughter broke hearts across the world:

“For those that haven’t heard, Kellie passed away last year from her injuries. She stayed alive for 391 days and I stayed by her side. The man responsible has been sentenced to 15 years in prison. Our medical bills are almost done being handled, thank all of you who stood with us and continue the fight against drunk driving.”