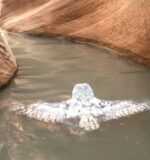 Hikers walking through a canyon in Lake Powell between Arizona and Utah stumbled upon a rare sight. A swimming owl.

Owls are not known for swimming in water, so when the hikers saw the birdie doing just that, they were flabbergasted to say the least.

As confirmed by National Geographic, on the rare occasion when owls do get to swim, it’s never by choice. Beside the fact that their feathers aren’t waterproof, they have no means of defence once they’re in the water and cannot even ascend from it. Rather, they have to find a piece of land and dry their feathers before they can fly again. This means that this little guy was most probably fighting for its life when the hikers stumbled upon it.

Geoff LeBaron from the National Audubon Society told National Geographic that the swimming birdie in the video is most probably a young great horned owl that had just began to explore the world. “I suspect it actually fell out of the nest,” said LeBaron. “Great horned [owls] do nest on ledges on cliffs…”

“This bird is young enough that the parents were probably still caring for it, so hopefully once the folks go by, the bird dried off and its parents found it,” LeBaron added.

Let’s hope all turned out well for this lovely little critter.