Hidden amid the foliage and scrap metal, abandoned fleet of WWII fighter planes lie rotting in the backwoods of Ohio 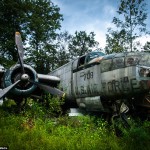 With their livery almost obscured by rust and moss these abandoned metal skeletons are all that remains from a fleet of World War Two fighter planes.
The aircrafts lie rotting at an abandoned graveyard in Ohio, America, amongst overgrown foliage and scrap metal.
They were lovingly collected by scrapyard worker Walter Soplata in his back garden in Newbury, Ohio, from the late 1940s, after he launched a one-man mission to save them from being dismantled and discarded. These eerie pictures show all that remains of a fleet of World War II U.S. Air Force fighter planes. With their livery almost obscured by rust and moss these abandoned metal skeletons are almost unrecognisable from the once great air crafts they were. Pictured is a B-25 Mitchell Mr Joo, from Ohio, said: ‘I was driving around looking for derelict buildings to photograph and I stumbled across a big open space on the map so I decided to check it out.
‘There ended up being someone at the property and he gave me a bit of history and let me take photographs.’ The planes were assembled by scrapyard worker Walter Soplata in his back garden in Newbury, Ohio, from the late 1940s
Around 50 engines and 30 aircraft currently lie in the cemetery.

‘It is crazy how much history is just sitting there like an outdoor museum,’ said Joo. ‘It’s definitely one of the most interesting places I’ve photographed.

‘It creates its own post-apocalyptic view and it’s like art in a sense. It’s totally deserted and forgotten and the atmosphere is really eerie.’

The graveyard is a resting place for several serving planes from the second World War. A Boeing 707 lies on left, while on the right a Beech 18 sits collecting rust. After Mr Soplata’s death in 2010 the aviation graveyard was kept a secret by relatives fearing scrappers The once gleaming cockpit of a fighter plane gather moss and rust. Mr Soplata was moved to rescue the planes through his work at the scrapyard Planes from other conflicts are also included in the collection – such as this F-86D Saber plane
‘Some of these planes actually bombed places – people could have died in those planes,’ said Mr Joo. ‘There’s so much history throughout the whole entire place – it’s a little bit creepy when you think about it.

‘If a picture could tell a thousand words you could write books and books from these. It’s been sitting pretty much abandoned since the seventies.
‘It’s a really incredible place to see in person. Today’s decay is yesterday’s memories.’