Hey, What’s All That Stuff In The Water. Let’s Look Closer…A Little Closer… WHAT?! 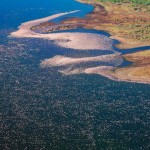 Imagine this – you’re flying high above the vast and beautiful landscape of Kenya, Africa, just taking everything in when, suddenly, something rather strange catches your eye.
You look far down below to see a large body of water filled with thousands upon thousands of little pink spots, mainly concentrated upon the shore line. You stare, out of wonder and complete bewilderment, as you try to figure out just what the cause of that pink hue is.

You gradually get closer and closer to the spectacle, and are able to make out some distinguishing features – pink feathers, long legs, and black beaks. Yep, those pink spots you saw from above, they’re flamingos.

And not just a few of the exotic birds, but millions of them (around 1.5 million that is), all gathered along the water’s edge. These many flamingos are hanging out at Lake Nakuru, which is located in Kenya’s rift valley and is protected by Lake Nakuru National Park. Nakuru also means “dusty” or “dusty place” in Maasai, and you can see why in some of the pictures. But, let’s be honest here, the real eye catcher is all those flamingos!

While the area is home to plenty of other types of wild-life, like other birds, warthogs, and baboons, it’s especially known for attracting enormous colonies of flamingos, the exact numbers ranging in size. It’s truly an amazing sight, all those pink feathered birds feeding on the algae of the lake. I can only imagine the racket so many birds would make too, since flamingos are notorious for their loud honking sound. The lesser flamingos (distinguished from greater flamingos by a smaller size and blacker bill) have claimed Lake Nakuru as one of their favorite foraging sites. Gathering in colonies and hunting in packs, the birds search together for food around the lake, sifting in the waters for their favorite type of algae: blue green.

Blue green algae thrives in warm alkaline waters, like Lake Nakuru, and has an especially high soda content at the location due to the blazing hot African sun. Flamingos are so fond of the algae that the population can consume up to 500 tons of the food per day! The flamingos don’t only feed off of this lake though but move to other areas of Africa as well, their group numbers fluctuating from thousands to millions of birds. Unfortunately, the total number of flamingos that have feeding in the favored Lake Nakuru has been declining. There are a number of suspects causing this change, most from unnatural causes like tourism and industry pollution that gets dumped into the water.

The lake’s changing water levels during the dry and wet season have also been having greater variation than usual, likely because of intensive crop production and urbanization, both of which negatively affect the soil’s ability to absorb water. These unfortunate impacts, like pollution, drought, and flooding, destroy the flamingo’s food and force them to travel to other lakes.

The gathering of so many flamingos really creates such a beautifully fantastic spectacle and, given the decreasing population of the birds at Lake Nakuru, it may not be around for much longer. You should soak up this amazing natural phenomena while you still can because, really, what else but flamingos can tinge the water pink in such a spectacular way?