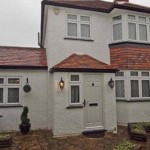 I love it when homes look typical from the outside, but inside, they tell an entirely different story. If you’re not a fan of bright colors, I’d look away now.

No one had any idea that a home in Middlesex, U.K. held a giant secret inside. After all, the only hints of purple in sight were some lilac flowers planted by the door…

But inside, everything is purple. E-V-E-R-Y-T-H-I-N-G. From carpets to upholstery, this house pays homage to the royal color like nothing I’ve seen before.

A couple years ago, the home was put up for sale at nearly $600,000. Rightmove.com posted photos of the interior, and it didn’t take long for this “ordinary house” to go completely viral. People from all over the world were shocked to see the inside! Those who like the color purple say it’s a dream. Those who don’t, say it’s more like an eyesore.

The purple home has been repurchased since it was listed. No word on whether or not the purple is still intact (though I hope there’s still a keepsake of some sort!)

Check out photos below, and tell us: Would you ever live inside a purple house like this one? Please SHARE this with your friends on Facebook!
——————————————————————————————-
Looking at it from the outside, you’d never know what hides behind the walls. Sure, this four-bedroom home in Middlesex, U.K. is beautiful, but unassuming. ——————————————————————————————-
In Europe, since the time of the Tyrian purple worn by Roman Emperors, purple has been the color most associated with royalty. It is still used by the British Royal Family and other royalty in Europe as a ceremonial color on special occasions. ——————————————————————————————
In Europe and America, purple is the color most associated with vanity, extravagance, and individualism. Among the seven major sins, it represents vanity. It is a color which is used to attract attention. The carpet going up the bathtub walls is a humorous touch…