He Set Up A Camera In The Kitchen, Now Watch The Lemon…CREEPY!! 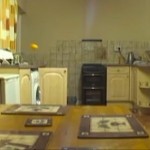 After using a Ouija Board, YouTube user “Mellowb1rd” captured what he describes as some of the most violent poltergeist activity he’d caught on tape for a while. All paranormal activity had stopped by the time he got home, but not before the “poltergeist” had made a hell of a mess of my kitchen. 15 seconds in, the lemons fly out of the basket on the counter. Then, all of the cupboard doors swing open. It’s a frightening sigh, to say the least.

We’ve seen videos like this one before, and people usually go wild for them. In 2009, a man uploaded this surveillance footage from Disneyland when a faint figure walks down the path in the middle of the night. It’s no surprise that while people think it’s all visual trickery, others believe in the otherworldly and think another entity is present in this man’s home. One YouTube says, “These are very real demon spirits invoked by the use of this guy’s foolish use of a Ouija Board.” Regardless, this is one fascinating video, and I couldn’t look away.