Happy Pigs Swimming Are Already Bizarre But When You Hear How They Got There… WOW! 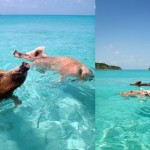 f you’re still waiting for pigs to fly, how about watching them swim in the crystal clear waters of the Bahamas? And when you hear how these happy hogs got there you’ll be even more amazed!

These pampered pigs live in a lap of luxury on their own tiny private island in the Bahamas where they relax in the shade during the day and take a dip in the crystal clear ocean when it gets too hot. These sun baked swine are sure living the good life, just one look at their faces and you can tell that these are the happiest little critters in the world. And who wouldn’t be?!

But although these hogs are in heaven now, the legend of how these beach babes came to live on the island is quite a miraculous tale.

Local legends say that the pigs were the lone survivors of a shipwreck that happened a hundred years ago or so. It is said that as the ship sunk down, these buoyant little buggers, who were supposed to be breakfast for sailors, were instead able to float up and away from the wreckage and swim to the nearby shores.

It is here where they spent a few decades making their exiled deserted island into a home, adapting to the new environment in the most adorable of ways that it would make even Charles Darwin let out a great big “Awwwwwww!” Where normal pigs would cool off by rolling around in mud, these tropical piglets instead use the refreshing Bahamas ocean water to keep their bodies cool. And all the time spent paddling their little hooves has taught these cuddly creatures to swim more gracefully than most humans. Now how cute is that?!

The adorable little boars spent a few years in solitude until locals discovered the island and their not so ordinary inhabitants. Today tour boats are taken out to the appropriately named Pig Beach, to catch a glimpse of these strange but lovable little swine. Eric Cheng, a photographer who visited the island, had this to say: “Because locals bring food, the pigs will run into the water and actually swim out to the oncoming boats, as if to greet them individually. It is strange enough to see pigs lying around on tropical beaches of white sand, but to see them then charge into the water to greet oncoming boats is just bizarre.”