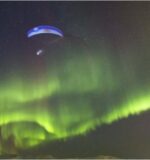 Flying through the Northern lights is one of the most magical things that can ever happen to a human.

Sighting the Aurora Borealis, or the Northern Lights, is a rare and unique experience for anyone. Spanish acro pilot Horacio Llorens, however, had an experience even more rare – viewing the phenomenon while paragliding.

“Thousands of years ago, people looked up and saw the Northern Lights, and thought they were magic,” Llorens told Red Bull. “It feels like clouds are in front of you, 500m away, but in reality they’re 15,000m over your head.”

Struggling with -15 degree temperatures on the ground near Trømso, Norway, the glider put on a wetsuit and battery-heated gloves, powered up his paramotor, and then took off on an amazing a night flight in the ethereal green waves of the Aurora.

It all sounds like a mission, doesn’t it? Indeed, flying in cold temperatures is a challenge in itself – and arranging it to happen in front of the Northern Lights is even more challenging.

“I wanted to make sure I had a very powerful paramotor. The 200cc machine gave me the chance to climb whenever I wanted – or get out of trouble if I needed to,” said Llorens about what it took engine-wise to complete the project.

He also obtained a permission from the Swedish government, and then there was only one more thing he needed: a wetsuit. Since most of Llorens’ flight was done over extremely cold water, he needed a proper one to give him 20 minutes or so for rescuers to get to him – rather than the two or three minutes he would have had without it.

He also needed heated gloves to keep his fingers warm enough for fine control over the throttle, while the final piece of the flying package was battery-powered spotlights to light up his rig against the night sky.

Well, you’ve seen the result above. According to his account, it was one of Llorens’ most incredible experiences of his very adventurous life.