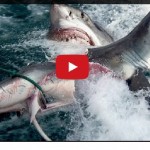 A 10-foot shark was bitten nearly in half by a ‘monster shark’ twice it’s size – and that Great White is still on the prowl off the coast of Queensland, Australian officials said.
Just when you thought it was safe to go back in the water…

Swimmers were warned that a “monster shark” was prowling off a popular Australian beach, one that nearly bit a 10-foot great white shark in half last week, London’s Daily Mail reported.

Based on the bite marks, experts say the larger shark must be twice its victim’s size.

The smaller – relatively speaking – great white was hooked on a baited drum line when it was attacked, and was still alive when it was hauled onto a boat off north Stradbroke Island in Queensland.

The fatally wounded shark was found just a few miles away from the island’s popular beaches, a haven for surfers and bathers.

“That cannibal thing is what great whites do; they’ll eat anything, including their own kind,” Hugh Edwards, a local shark expert, told Australia’s 7 News. “It would be sensible not to swim in that area for a little while.”

Though shark attacks worldwide dipped from 71 to 59 between 2007 and 2008, according to the International Shark Attack File, and few of them were attributed to great whites, the large shark had been vilified even before Steven Spielberg’s 1975 thriller.

Speculation is that this “Jaws”-sized shark has been lured to the area by the rotting carcuses of three whales that were trapped in anti-shark netting surrounding the Queensland coast.

Five people were fatally attacked in the late ’50s, the Courier Mail reported, but only one since the nets were put in place in 1962.

“Whatever attacked and took chunks out of this big shark must be massive,” surfer Ashton Smith, 19, told the Daily Mail. “I’ve heard about the big one that’s lurking out there somewhere.

“We’re all being very, very cautious.”