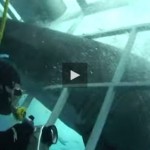 “On November 4th we had an incident that was pretty darned exciting. CC, or Cut Caudal, one of our regular sharks, accidentally ran into one of the main cages on the Searcher. CC came up nearly vertical about 20 feet away from the cage and grabbed one of the hang baits, which he is known to do on a regular basis. However, on this particular day he swam right into the portside cage’s viewing window. As CC took the bait he instinctively rolled his eyes back, couldn’t see where he was going and accidentally swam directly into the viewing window. CC’s entire head went inside the cage and he was stopped just short of his pectoral fins. Well, we all know that white sharks have no reverse and CC was too far in to turn around. He tried to turn, but he could not quite get his snout to clear the corner. He rolled on his side and began to thrash up and down trying to free himself. Being a rather large white shark he just ended up making the opening bigger by simply removing the front of the cage so he could get out of the cage. CC literally removed all the lower front vertical bars and the horizontal bar that connects all of the vertical bars to the main frame of the front cage panel and then swam away. What was amazing is that it took only about 10 seconds to do this. What was even more amazing was that there were 2 divers in the cage at the time and they thought that this was the coolest thing they had ever experienced and walked away completely unscathed. The divers also said that CC was just fine too!

We were all very relieved that no one was injured. We were also pleased that our divers listened to the safety briefing prior to diving and followed the instructions and evacuated the cage when this incident occurred. One diver utilized the emergency escape hatch and somehow managed to film the entire event. We learned something from this and we will take appropriate measures to prevent this from happening again.

When we said, “You can get face-to-face with the ultimate predator” this is not what we had in mind!