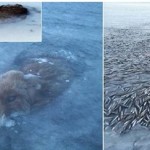 A fox has become the latest victims to the freezing temperatures on Scandinavia’s waters as it was found frozen solid in a lake in southern Sweden.
The animal was discovered by a skater on Lake Bunn, near Jönköping, who originally thought it was a piece of foam rubber, but found the poor fox dead in the ice with its head just above the surface.
It follows recent ‘animal ice deaths’ in Scandinavia, where an entire shoal of fish were photographed off the coast of Norway just days after a moose had suffered the same fate. Not saying much now: The fox was found frozen solid in the ice on a lake in southern Sweden
Jeffer Sandström, 26, said: ‘From what I could see the ice had obviously cracked and the fox had fallen through the hole. Unable to get out after scrabbling around it must have tried to swim under the ice in a last-ditch effort to save itself and then probably suffocated.’
He said: ‘I’d been unsure myself as to whether skating on a lake here in Jönköping was a good idea.

‘Temperatures had been below zero for several days though, so in the end I figured it was strong enough for a skate. I guessed the ice was likely between three and five centimetres thick.’
‘I skated fairly close by and saw it out of the corner of my eye and thought someone had thrown foam rubber of something into the water, and then I saw it was a fox,’ Jeffer told Aftonbladet.
‘It was totally frozen, the whiskers were sticking up above the surface.’ Well and truly iced: It is likely that the fox fell through thin ice and unable to get back out, froze to death as temperatures sunk overnight On thin ice: Skater Jeffer Sandström decided to return home after he saw that the fox had gone through the frozen surface Cold shoulder:When Mr Sandstrom found the fox on Lake Bunn, near Jönköping, he originally thought it was a piece of foam rubber
He added: ‘I’d never seen anything like it before. I must admit I felt really sorry for the fox, but not for long, because I felt if it can happen to the fox, I might be next.’
‘I just thought “Whoops, it’s time to go home”.’
The is is not the first time animals have been caught out by freezing temperatures in Scandinavian waters.
Last week an entire shoal of fish was found frozen mid-swim off the coast of Norway, near the northern island of Lovund.
Earlier in the winter, a moose was found frozen solid after falling through the icy surface of a Norwegian lake, found half visible above the ice.
It appears as though it was trying to cross the ice, when it cracked, trapping the moose in the freezing water. Cold sushi: An entire shoal of fish was found frozen mid-swim off the coast of Norway, near the northern island of Lovund Frozen: The animal was found frozen solid in the middle of the water near Bodo in northern Norway with just its antlers and back visible above the ice