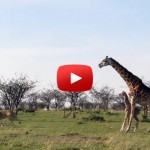 This footage was taken from Kicheche Bush Camp (http://kicheche.com/our-camps/bush-camp) in the heart of the Olare Motorogi Conservancy in the Masai Mara by seven time Kicheche visitors Bill and Barbara Westbrook.

” Each time I think we can never beat the last,’ Barbara says ‘but this was remarkable, going on for almost half an hour as the mother protected her calf ferociously from the young Moniko pride. It was heart in the mouth stuff as we felt we might be witnessing something brutal as the casual menace of the sub-adult lions showed little signs of abating. Eventually the giraffes got away and we breathed again.’

To use this video in a commercial player or in broadcasts, please email licensing@storyful.com