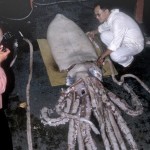 Scientists estimate that giant squid can grow up to about 60 feet (18 meters) long, including their massive tentacles. (Photo: Mark Norman) Giant squid live up to their name: the largest giant squid ever recorded by scientists was almost 43 feet (13 meters) long, and may have weighed nearly a ton. You’d think such a huge animal would be hard to miss. But because the ocean is vast and giant squid live deep underwater, they remain elusive and are rarely seen: most of what we know comes from dead carcasses that floated to the surface and were found by fishermen.


But after years of searching, in 2012 a group of scientists from Japan’s National Science Museum along with colleagues from Japanese public broadcaster NHK and the Discovery Channel filmed a giant squid in its natural habitat for the first time (video below).

The species was first recorded live in 2006, after researchers suspended bait beneath a research vessel off the Ogasawara Islands to try and hook a giant squid. As the camera whirred, the research team pulled a 24-foot (7-meter) squid to the surface alive enabling people around the world to finally see a living, breathing giant squid.

This is a spliced video of the key squid footage from Discovery Channel’s “Monster Squid” broadcast on January 27, 2013. Thank you Discovery Channel for broadcasting this program. This post is not for profit! I just want to share the joy for all those Ceph-heads out there.