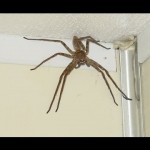 Worlds Largest Spider! The Giant huntsman spider is huge, but not deadly to humans. Biggest in the world, the Giant Huntsman Spider was just recently discovered in 2001 in a Cave in Laos.

Their torso averages about 2 inches long but it’s their leg-span which earn them the title as the biggest spider in the world as they can extend to 12 inches long which is about the size of this dinner plate! (show dinner plate)

The Goliath Birdeater is considered the second biggest spider in the world or largest if you classify it by sheer mass.

These giant huntsman spiders are often mistaken for tarantulas because of their size, however you can easily tell them apart because of their unique crab-like legs which allow them to move side to side with incredible speed and agility making them lighting fast.

Although they can produce silk these spiders don’t usually build webs as their name comes from their ability to stalk and hunt down their prey.

Have you seen Arachnophobia?

Like something out of a horror movie these giant carnivorous spiders jump on and attack their prey injecting venom into their victims liquifying the soft tissues which make their prey easy to ingest.

They mainly feed on insects and small invertebrates like lizards but sometimes bigger predators become prey as birds, geckos and other animals that try to attack the huntsman spider end up “instead” becoming the SPIDER’s next meal

Although a human encounter with one of these fearsome spiders may seem deadly, they’re venom is not fatal to humans though their bite is very painful and in addition to some swelling of the skin other effects may include nausea, vomiting and headaches.

These spiders only live about 2 years and amazingly they’re able to regenerate lost limbs.

Since it’s discovery, these spiders have been turning up all over the world, with recent reports in Florida and Hawaii. They love to inhabit sheds, garages, other dark isolated places.

If you find a giant huntsman spider in your home YOU should get rid of it immediately as the female spiders can lay up to 200 eggs and populate very fast. It’s best try to relocated the spider instead of killing it as spiders play an important role in controlling the population of other insects and pests.

However caution should be taken as these spiders move very quickly and will be difficult to catch and if dealing with a mother spider guarding her eggs she may become extremely aggressive toward you and because if this it might be best to hire an exterminator to handle the removal process.