Giant Sea Elephant Emerges From The Ocean In Iceland 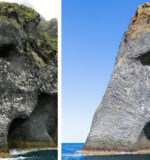 This basalt rock formation on the island of Heimaey in Southern Iceland looks just like a giant elephant or wooly mammoth dipping its trunk into the sea.

Heimaey is the largest island in the Vestmannaeyjar archipelago, which is a geologically young set of islands formed by volcanoes. Eldfell, a volcano on Heimaey, erupted in 1973, prompting locals to pump cold seawater onto the resulting lava flows in a successful attempt to redirect it from their harbor. The elephant rock on the beautiful beaches of this island that attracts visitors is also formed from the volcanic basalt found everywhere on this island. Check the wonderful creation of our amazing nature below!