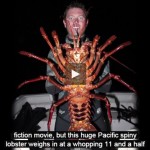 We upload a new incredible video every weekday. Subscribe to our YouTube channel so you don’t miss out!
A biologist caught a huge 70-year-old lobster that could be one of the biggest catches of the year. Forrest Galante was free-diving when he found the huge crustacean that weighed close to 12 pounds. Due to over fishing and general ocean conditions, the Pacific Spiny lobster rarely exceeds three pounds in weight. After debating whether to toss him back or eat him Forrest decided he had to take the lobster back to his home in Santa Barbara to show his family. The family quickly decided there was no way they could eat the lobster so took it to a marine reserve off the coast of California where it was released.