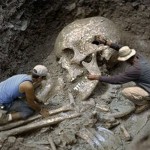 Science inhabitants of Atlantis was so advanced that they could afford to experiment with human genetic material. For example, the Atlanteans created a new “breed” of people with tremendous growth and other qualities – to participate in wars, or simply “the love of art.” It is believed that the finds in Egypt – it’s just the remains of people who were able to escape from the destruction of Atlantis. According to various sources, their growth was from 2.5 to 6 meters…

Mysterious remains of giant human skeletons unearthed. Is Nephilim real? These discoveries are always the same, the skeletal remains of some giant bones were dug up and a photo with someone standing next to what appears to be an unbelievably large human skeleton.

Skeptics immediately dismiss all of these as just being fake, just another hoax. As some of the photos have been revealed as just that…a cleverly photo-shopped fake image.

Can they all be hoax’s or have giant humans ever existed?

Since the late 1800’s there have been countless newspaper articles reporting discoveries of giant human remains being found all over the world. This is when things get interesting as some people claim that the conspiracy lies not in the giants skeletons discovered, but in their cover ups.

If giant humans once existed, would that Discredit the theory of evolution?
And if any of these giant skeletons are indeed real, is that proof of the Nephilim, an ancient race of people like Hercules believed to be the son of gods.

As numerous comments claim that the bones given to the Smithsonian were all “mysteriously lost” before they could be put on display.

Is any credit to these claims or are the existence of giants in history just a myth?