Game of Thrones gets World Cup kits: which House is your favourite? 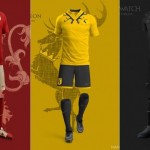 We talk to Spanish designer Nerea Palacios, who took inspiration from HBO’s hit series for her latest project Most consistent home wins record although has been known to squander leads late in games. Photograph: Nerea Palacios
Spanish designer Nerea Palacios’ wants to work for Nike. That’s no secret. She says so in her Twitter bio, and her website, I Want To Work For Nike, couldn’t make her intentions more clear. For years, she’s been crafting concepts for athletic wear, showing off her talents with the help of Photoshop.

For her latest project, Palacios has taken inspiration from two of the biggest television events of the year and designed World Cup jerseys inspired by HBO’s Game of Thrones (taking into account family history, colours, and legacy, of course). We asked her to tell us a little bit more about the project.

First: why Game of Thrones, and why soccer uniforms?

I’m a big fan of Game of Thrones and of football, and I had done all the World Cup kits and was looking for something fresh that hasn’t been done before. So if allowed me some freedom. A Lannister always hits his nets. Photograph: Nerea Palacios
How did you channel the Game of Thrones vibe into athletic wear? How did characters impact design?

I think it’s really easy: they have the crest, the House colours, and even the motivational phrase – it’s practically a sport to reach the throne.

But I tried to focus on the Houses and not in the characters. Maybe the Baratheons are more complicated since every one of them seem to be really creative with the Crests and family colours. Definitely their away kit, as temperatures around Winterfell probably require long sleeves most of the year. Photograph: Nerea Palacios
Which House would you align yourself with?

So hard! I don’t want to die yet. Maybe the Lannisters. I come from a really particular family so it would be like home. And it would be nice to hang out with Jaime and Tyrion and never owe anyone nothing. [Though] I’d rather not comment about Cersei. Most consistent home wins record although has been known to squander leads late in games. Photograph: Nerea Palacios
Which Game of Thrones character do you think would be the biggest asset to the World Cup?

Daenerys seems to be well prepared, so she’s have quite a team. On the other hand, Sansa and John look like they know how to play – maybe they will be the surprise. Arguably the strongest squad but differences over the captaincy and pay have caused internal divisions in the locker room which sometimes spill out onto the field. Photograph: Nerea Palacios
What is it about Game of Thrones that seems to universally apply to everything? There seems to be a place for it in everything: food, fashion, music, and in your case, sports.

It’s the most expensive TV show! and one of the longest “history” books, so they have place for everything! As long as they keep improving the team, they are doing an amazing job. Hopefully fireproof, as Drogon has been known to get overexcited when the Targaryens get into the final third. Photograph: Nerea Palacios
Your love of Nike is pretty profound, but if you had a choice between working for Nike and appearing on Game of Thrones, what would it be?

I’m sorry but I will choose Nike. I can use my imagination to appear on GOT. ” class=”alignnone size-full wp-image-1762″ />
Refusing to play in the Seven Kingdoms league, the all black kit helps the team in matches against Wildling FC, who never bother to wear the same colours. Photograph: Nerea Palacios
Perfect choice. And we can all agree that Joffrey wasn’t worthy to wear any of these uniforms, right?

Maybe I can create [uniforms for the dead characters] – we can tell them that was your idea. His will be the creepy one. I will try to catch his essence.