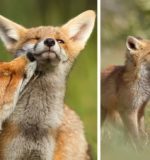 Talented Dutch photographer Roeselien Raimond (whom we’ve written about and spoken with before here) takes stunning photos of wild foxes. For this year’s Valentine’s day she agreed to give Bored Panda an exclusive interview and talk about how attentive and loving foxes are, despite the popular belief that they are mean and deceitful creatures.

“I know of no animal that shows as much love and affections as foxes do. That could be because I know no animal, like I know foxes, but that’s not the point here. The point is….love. Foxy love to be more precise”.

“Foxes are known to be smart, false, deceitful and mean creatures- a successful character assassination; even I believed it as a child, when reading the famous fox fables. That was, until I started following foxes and learned to know them very well and found out that love must be their middle name”.

“I know of no animal that shows as much love and affections as foxes do,” Roeselien told Bored Panda “It’s sad that foxes are believed to be deceitful and mean creatures, even I believed it as a child” “That was, until I started following foxes and learned everything about them” “I found out that love must be their middle name” “Mothers and children, brothers and sisters, fathers and cousins… it’s like they live in some sort of hippy community” “Sleeping in peace and waking up for love and cuddles, proving everyone who thought they were mean wrong!” “There’s one thing I can still agree to, regarding the stereotypes about foxes. Foxes are smart indeed!” “So spread the word and that foxy love!” Thank you, Roeselien Raimond, for talking to Bored Panda about your amazing work!