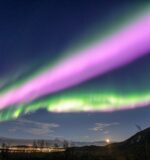 On November 3rd, a temporary crack in Earth’s magnetic field set off rare pink auroras in the skies of northern Norway.

They don’t tend to travel very far though, usually reaching an altitude where there are a lot of oxygen atoms, which are ionized and excited by the charged particles from the Sun and commonly emit a green hue. This time, however, a fierce solar storm created a gap in the magnetosphere, and the solar particles got deeper than usual, reaching the nitrogen atoms found lower down. These atoms, in turn, create a pink glow.

The rare phenomenon was spotted by a tour group led by Markus Varik, a northern lights tour guide from the Greenlander tour company based near Tromsø in Norway. The vibrant auroras emerged at around 6 p.m. local time and lasted for around 2 minutes, Varik told Live Science via email.

“These were the strongest pink auroras I have seen in more than a decade of leading tours,” Varik said. “It was a humbling experience.”

The hole in the magnetosphere closed about 6 hours after it first opened. During this time, a strange ribbon of blue light also emerged in the skies above Lake Tornetrask in Sweden, where it hung motionless in the sky for around 30 minutes, according to Spaceweather.com. It was captured by photographer Claudio Comi, who works for another tour operator in Swedish Lapland.

However, experts are unsure if the unusual blue ribbon was a never-before-seen kind of aurora caused by the opening in the magnetosphere, or if it was the result of something else. One expert suggested that it could have been made up of frozen fuel from a Russian rocket, but, according to Spaceweather.com, no rockets were spotted in the area during that day.