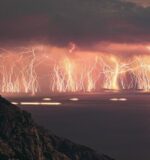 The saying “lightning never strikes the same place twice” obviously does not cover Venezuela’s Lake Maracaibo and the so-called Catatumbo strikes, which occur only in this part of the world. At 13,210 square kilometers (5,100 square miles) Lake Maracaibo was once South America’s largest lake and is also thought to be one of the oldest lakes on Earth. However, it was featured in the Guinness Book of World Records for a different reason:

During the region’s rainy season (starting at around October), this otherwise sleepy lake lights up with an impressive average of 28 lightning flashes each minute. In fact, it has the highest concentration of lightning strikes with an average of 233 flashes per square kilometer each year. The place has recently been named as the world’s lightning capital, based on a study using observations from the Lightning Imaging Sensor onboard NASA’s Tropical Rainfall Measurement Mission.

The phenomenon is known as Catatumbo lightning (Catatumbo means “House of Thunder” in the language of the local Barí people) and while scientists have offered several causes, none have been proved so far. It is an atmospheric phenomenon that occurs over the mouth of the Catatumbo River where it empties into Lake Maracaibo in Venezuela, typically over a bog area formed right above that point.

Catatumbo lightning originates from a mass of storm clouds at an altitude of more than 1 km (0.6 mi), and occurs during 140 to 160 nights a year, 9-10 hours per day, with a whopping number of lightning flashes (from 16 to 40 times per minute). Catatumbo storms are thought to be the result of winds blowing across Lake Maracaibo and the swampy plains surrounding it. These air masses meet the high mountain ridges of the Andes, the Perijá Mountains (3,750 m / 12,000 ft), and Mérida’s Cordillera, enclosing the plain from three sides. Scientists believe that the heat and moisture collected across the plains create electrical charges and eventually result in thunderstorm activity as the air masses are destabilized by the mountain ridges. The phenomenon is characterized by almost continuous lightning, mostly within the clouds. Interestingly, the lightning produces a great amount of ozone, albeit it is unlikely to have any effect on the ozonosphere due to its instability. Definitely the most electric place on earth.