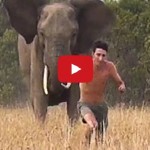 Wild man Andrew Ucles takes you directly into the danger zone of Africa with an elephant attack. Using his unique understanding of animal behavior and his ability to get in up close and personal to these majestic beasts he soon finds himself in a race trying to out run a large African Elephant before he is nearly trampled to death. The sound of an African Elephant chasing you down is only half the excitement, however, the feeling of your bones shaking with his every step is seriously terrifying.