Early Exposure To Pets, Dirt & Germs Are Good For Babies 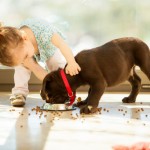 Babies who are exposed to animal dander, roach allergens, and household germs during their first year appear to have lower allergy and asthma risk, a new study shows.

You’re probably familiar with the hygiene hypothesis: Children who grow up in germ-free, too-clean environments develop hypersensitive immune systems. Previous work has shown that children growing up on farms, with regular exposure to microbes in soil, have lower allergy and asthma rates. Other studies, however, found increased risk among inner-city children who are exposed to high levels of roach and mouse allergens. So, what gives?

The Urban Environment and Childhood Asthma study examined a birth cohort of 560 children at high risk for asthma in Baltimore, Boston, New York, and St. Louis over three years. They measured allergen exposure and the bacterial content of house dust, and they monitored the infants for allergies and wheezing using physical exams and blood and skin-prick tests.

A team of researchers looking through these data found that infants who grew up in homes with cockroach droppings and mouse and cat dander in their first year have lower rates of wheezing at age three, compared with infants who were unexposed to these allergens. Furthermore, exposure to all three allergens lowered risk more than exposure to just one or two.

About 40 percent of allergy-free, wheeze-free kids grew up in homes with the highest levels of allergens and the richest array of bacterial species. By contrast, only 8 percent of children who suffered from both symptoms had been exposed to those similar substances during their first year. Wheezing, in particular, was three times as common among children growing up without exposure. The protective effects, however, disappear if infants encounter them after their first year. “The timing of initial exposure may be critical,” Robert Wood of Johns Hopkins Children’s Center says in a news release. “Not only are many of our immune responses shaped in the first year of life, but also that certain bacteria and allergens play an important role in stimulating and training the immune system to behave a certain way.”

The work was published in the Journal of Allergy and Clinical Immunology last week.